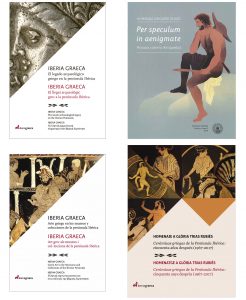 The situation created this year 2020 by Codiv-19 has forced us to interact more than ever telematically. As a result, there has been an increase in visits to the Iberia Graeca website and also a considerable increase in downloads of our publications, which this year have reached 7239 downloads.

The book Iberia Graeca. The Greek archaeological legacy on the Iberian Peninsula has had 1630 downloads (980 in the Spanish-Catalan version and 650 in the English-Greek version, computing a total 12.044 downloads since 2014.

The book Iberia Graeca. Greek Art in the Museums and Collections of the Iberian Peninsula has been downloaded 2960 times (2281 in the Spanish-Catalan version and 679 in the English-Greek version), with a total of 4867 since 2019.

The monograph Homenaje a Ricardo Olmos. Per speculum in aenigmate. Miradas sobre la Antigüedad, published by the Asociación Cultural Hispano-Helénica and hosted on our website, has had 963 downloads, adding up to 9898 since 2015.

We look forward to increasing our publications over the next year. For now, we wish you the best for the next year in all aspects, with the hope that we can recover the lost normality again and with a special memory for our dear Paloma Cabrera.