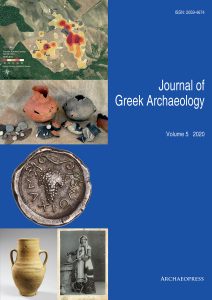 Last November, Volume 5 of the Journal of Greek Archaeology (JGA), corresponding to the year 2020, was published by Archaeopress (Oxford) and directed by Professor John Bintliff of the University of Leiden. The book contains three articles on Prehistory and Protohistory of Greece and Sicily; six papers from the colloquium Beyond the Gift: The Economy of Greek ‘Colonisation’ (edited by Lieve Donnellan); an article on Athens in Late Antiquity; ten contributions from the colloquium The Medieval Countryside in the Aegean and Anatolia: An Archaeological Perspective (edited by Effie Athanassopoulos); and a work on pottery production in the Aegean during the first half of the 19th century. In addition, it includes 23 book reviews and a Methodology section with an interesting paper: “A guide to good practice in Mediterranean surface survey projects”, signed by 18 researchers, including Victorino Mayoral and Jesús García Sánchez, of the Instituto de Arqueología de Mérida-CSIC, and Luis M.ª Gutiérrez Soler of the Universidad de Jaén.